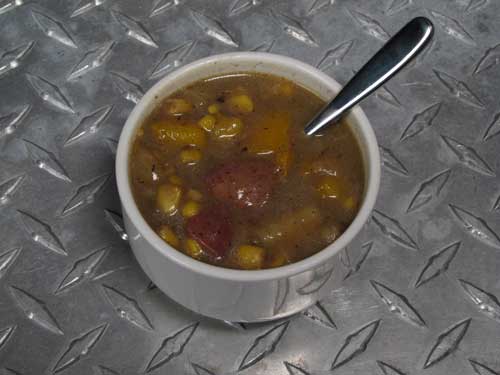 This ain't your mama’s white potato soup. But if you cook it for Mom I bet she'd love it. This rich and earthy soup combines small red potatoes, corn and savory spices for a stick to your ribs meal. The soup is vegan since it uses coconut milk, which adds an exotic hint to the flavor. The red potatoes are cut so that each piece has some skin thathelps hold the cubes together. The potato skin adds some fiber, color and flavor, yet the potatoes are melt in your mouth soft. By adding the orange bell pepper late in the cooking process, it remains bright and crispy. If you make it mild by omitting the cayenne pepper, serve with your favorite hot sauce for the hot heads in the house!

Heat the olive oil in a large soup pot over a medium high heat. Add the onions and potatoes and sauté for 8 to 10 minutes until the onions become transparent. Add the corn, coconut milk, celery seed, cumin, savory, salt, white pepper and cayenne pepper. Stir well and bring to a boil. Reduce the heat to low and cover. Simmer for 1 hour, stirring often. Add the bell pepper and simmer for 1/2 hour, stirring often. In a small bowl combine the water and cornstarch, whisk together. Slowly pour the cornstarch mixture into the soup while stirring. Simmer for a few minutes while stirring until the soup thickens. Serve with sour cream on the side.

Why a zip code?